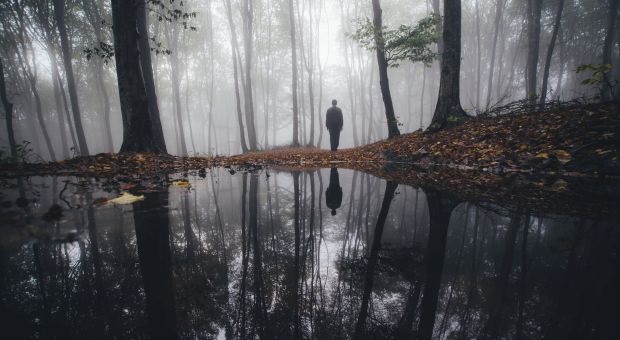 Surviving In The Woods With Minimal Gear And No Supplies

Today’s article is about a hypothetical yet plausible scenario: a survival situation while caught in the woods, especially if you’re without supplies and with minimal gear.

Moreover, it’s not uncommon for some preppers to believe that living in the woods may be something that many of us would have to do in the future, in the aftermath of a major SHTF event or a government gone rogue. The thing about crises is that they tend to strike out of the blue, taking everyone by surprise. The good news is that surviving in the woods, even if it’s now an almost lost art, was taken to perfection by our ancestors, and if they could do it, we can too. Or at least that’s an optimist’s view of the situation. Reality is a little bit colder than that, but let that go.

The first thing to remember in any survival situation is to stay cool, calm and collected, and assess the situation; then, think about the holy trinity: food, water and shelter. Another truth I learned the hard way is that everything in life is location, and the same applies to our scenario: what’s your starting location and what are the particular conditions of the situation? This is very important, and by determining these things first, you will be able to start thinking about starting a survival plan. The environment is also important, as in you got lost in the woods during the winter or during the summer? These subtleties can make all the difference in the world.

I mean, if it’s cold, you’ll have to assess your situation regarding your water source/supply, possible hypothermia (as in how well are you clothed), what’s your fitness level, do you have any means for making a fire quick, finding/building an improvised shelter etc. However, considering the holy trinity of survival, you should think about water first, whether it’s winter or summer, as you won’t last long without it. Dehydration installs just as quick when it’s very cold or very hot outside, remember that folks. The thing about winter survival is that if you have snow and you can make a fire, you automatically have water, and you don’t even require a container to melt the snow in it. All you need is a birch bark snow cone and a hot pebble inside.

Moving along with the story, the thing about surviving in wild is that everybody can do it for a couple of days, but if the episode lasts for more than 72 hours, you’ll be in serious trouble if you were caught in the woods with your pants down, as in unprepared. The first thing to remember every time you’re going out in the woods or wherever, is to carry an emergency survival kit at all times, an EDC survival bag of sorts if you like.

This kit should contain critical survival gear, such as water purifiers/filters, fire starters, some survival tools (a knife, a whistle, a flashlight), an emergency blanket, and eventually a small amount of food (think along the lines of MREs or calorie bars). If you’re traveling away from civilization without an EDC survival bag, you’re basically asking for trouble. Another important issue to remember every time you’re away from keyboard is to notify people on where you’re going and when you’ll get back. This is as important as it gets, and you’d be surprised on how many people fail in this regard, which is as foolish as trying to cheat the good ol’ government on your tax returns.

Now, the common approach to any survival scenario is to assess your situation, and the first step is to acknowledge you’re lost; stop and think about it. Ask yourself where do you think you are, what’s your gear, what readily available items/materials can you use for survival and how long would it take until someone blows the whistle to authorities about your disappearance and cavalry arrives (don’t bet on that). However, regardless on how you address those issues, in order to initiate a survival plan, the priorities will be basically the same.

First things first: if you’re not sure where you are and where’s the nearest McDonalds, stop moving. I mean, getting deeper into the woods by additional traveling in the wrong direction wouldn’t help. Also, moving around will drain your energy, and also you could miss your search and rescue party, provided you told somebody about your whereabouts.

Now, whether it is winter or summer, hypothermia is the biggest risk you will face. You should know that people die in the Colorado Rockies every summer while fishing or hiking from exposure (hypothermia that is).

Hence, the first things you’ll have to address if caught in the woods would be shelter and fire. The ideal shelter would be a cave, yet they’re rather rare, so you’ll most probably have to settle for a dead-fall tree or a large pine tree. When looking for a proper shelter, remember that its main task is to protect you from elements (rain and wind mostly). A great shelter can be found at the bottom branches of a big pine-tree; this shelter also comes with a complementary bed made of pine needles, and I am not joking either. Next, do your best to conserve your energy. The less energy you spend, the less water and food you’ll require while waiting for the cavalry to arrive.

However, finding water should be your second-big priority besides staying warm. You should also try to start a fire as soon as possible. Smoke during the day and an open fire during the night are excellent as far as signals go, as they can be seen for miles and miles. Fire also keeps you warm and cozy, and allows you to boil the water (for purification purposes) or to cook your food. If you find a running water source (a small creek or even a river), with water usually come fish, frogs and other “goodies” that can be eaten in an emergency situation, so keep that in mind.

While there are many variables in this survival-in-the-woods equation, such as the climate, your gear/skill level, physical fitness and so on and so forth, speaking about the title of the article, there’s no particular order with regard to the steps to be taken for staying alive in this situation. Don’t get me wrong, you must prioritize finding shelter (hypothermia kills in 3 hours) and water (you’ll be seriously impaired both physically and mentally after just 24 hours if you don’t hydrate properly), yet don’t look for one thing, and then the other, but look for everything at once and react at what’s available at any given moment.

However, your priorities should be shelter-fire-water-food. But the most important thing to remember is don’t get lost, and if you do, don’t do stupid things, remain calm and try to assess the situation as realistically as you can. Then, start from there.