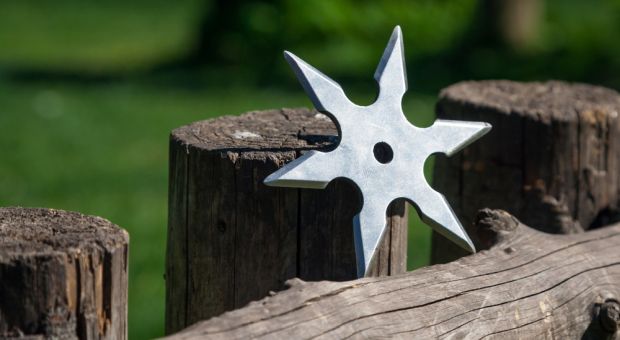 Self-Defense Tactics – How To Throw A Shuriken

Today’s article sounds like a lot of fun if you’re intro martial arts, or at least, sort of martial.

You know those ninja movies, where a black cladded and masked mysterious dude kills like 20 “samurai” or whatever prop-actors by throwing (presumably poisoned) shuriken at them?

Shuriken, you got that right, also known as throwing stars or ninja stars. What’s up with those famous ninja weapons, you ask? Well, to begin with a little bit of history, shuriken are (or at least were) some of the most important weapons in a ninja’s arsenal, and they’re also hugely misunderstood by the civilization of the round-eyed gaijin (that would be you).

See, ninjas were basically paid mercenaries, professional assassins who trained their whole lives for only one purpose: to kill for money. Ninjas were/are people with no morals and no code of honor, contrary to the popular wisdom, which is due to the huge number of B-category movies promoting and idealizing the image of the invulnerable and “cool “ninjas.

Ninjas and their art of fighting called ninjutsu used poisoned shuriken (among other things in their paraphernalia) to kill their enemies stealthily and quietly. When throwing shuriken, they usually aimed for the throat/face, but shuriken were also used for stabbing/throat cutting etc. at point blank range.

I must emphasize the fact that ninja were paid assassins with no morals and no remorse. Except from poisoning a shuriken (ninjas used strong poisons like aconite and other secret recipes painted on their weapons) or using it for slashing/stabbing in close quarter battle, throwing it at an enemy  would be quite useless in a real life situation, i.e.  as an attack/defense weapon, for obvious reasons.

Also it’s worth mentioning that the early shuriken used by ninjas in the pre-medieval period were very different from modern throwing stars, i.e. they were basically sharpened/tied together sticks which looked like stars. That was clearly due to technological constraints, i.e. in those days it was pretty difficult to manufacture steel/iron-made throwing stars. Modern shuriken are light weight and razor sharp, usually made of steel, and they’re mostly used for precision throwing. However, even the original (wooden) shuriken were perfectly capable of puncturing the enemy’s flesh, and sometimes they were used for distracting the enemy’s attention.

Initially, shuriken were created as self defense weapons, used by ninjas in retreat, and the mold was big nails or small knives. Nowadays, the typical shuriken looks like an asteroid with four arms, a design that it’s called the Flat plate type. However, there are many other designs, including the cross shaped shuriken, the folding type, the three/four pointed shuriken, the swastika shaped shuriken, the eight pointed and so on and so forth.

Even if Japanese ninjas used throwing stars to kill/inflict massive damage to their enemies, in our day and age, you can learn how to throw shuriken as a modern hobby, which may be incredibly awesome and fun. For example, you can organize shuriken throwing contests with your kids or your friends, and see who can stick the shuriken into the smallest grouping, just like with regular target-practice.

To begin with, you’ll need a suitable target, which may be a pine board or other soft wood. Alternatively you may use a foam board, or a cardboard box, there are lots of options. Try not to throw your ninja stars at live trees. You may kill the tree or damage property.

Now, the basics of throwing ninja stars are very similar to knife throwing techniques. The most usual approach is the overhand throw. Check out this video[1] and while you’re at it, keep in mind that ColdSteel makes arguably the sharpest knives and throwing stars in the industry.

Ninjas also used the side-arm delivery (like a Frisbee), which may seem awkward to some, but you know, when killing is your business, you have to do what you have to do, i.e. to throw from a sitting position, or with both hands, or when running, or even from a lying position.

Now, there are a lot of options for buying shuriken, but if you’re the DIY type, here’s a comprehensive guide[2] on how to make your own throwing stars, provided you have the skills and the tools necessary for the job, plus 10 dollars for expenses. Speaking of buying shuriken, if ColdSteel are too expensive for your budget (though they’re really impressive, to say the least, as they’re heavy, very sharp and huge), you can cruise Ebay (or the internet[3] for that matter) for cheaper Chinese knockoffs and what not.

Just make sure they’re legal in your neck of the woods[4] (I think they’re illegal in California, Indiana, New York, Kansas and Massachusetts, though I believe it’s completely ridiculous), and you’ll have massive fun.

I hope the article helped. If you have questions or comments, feel free to use the dedicated section below.