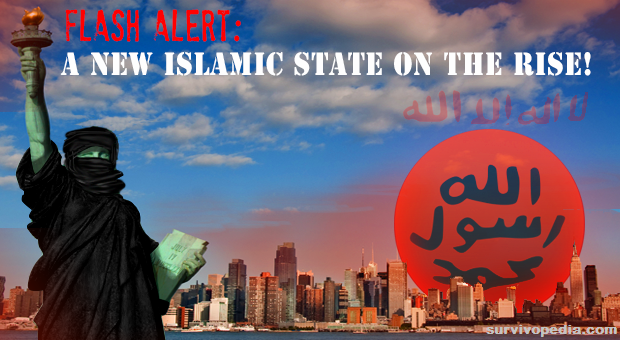 Flash Alert: A New Islamic State Is On The Rise!

It’s amazing how quickly things can change. A few short months ago, Iraq was more or less under control, with American and Iraqi troops protecting the people and the terrorists more or less on the run. Today, those same terrorists have the Iraqi army on the run and have captured over 12,000 soldiers.

While this might not seem like much to us here in the United States, it’s actually quite a big deal. There hasn’t been a caliphate since 1023 AD. Since then, those who have used the name Caliph haven’t ruled over a Caliphate.

The Caliph is the spiritual and civil leader of all Islam. As such, they are the legal successor of Muhammad. In the case of the new Caliph, Abu Bakr al-Baghdadi, is a direct descendent of Muhammad, adding legitimacy to his claim to the throne. The question is, how much will the other Muslim nations accept this claim?

The caliphate could become a unifying factor for all Muslims, breaking down national boundaries, as well as disagreement between Sunni, Shia and other Muslim branches.

If it succeeds in doing this, the new caliphate could easily rocket up to becoming a major world power; one that is fueled and driven by the hate of the radical elements within Islam.

While that is troubling enough, in and of itself, the big problem for us isn’t whether they unify the Middle East, but rather, what they decide to do throughout the rest of the world.

There are few important countries without a major Muslim population and nobody knows how many of those groups are truly militant.

How Safe Are We?

Here in the United States, Muslims control at least 35 known military-type training camps. While the FBI is aware of these camps, there is nothing that they can do to shut them down. Before they could be shut down, they would have to do some illegal act to demonstrate their hostile intent.

Terrorist training looks no different than legitimate sport shooting. With the rising popularity of the sport airsoft, there are many people who are training in military tactics.

That doesn’t make their actions illegal any more than using guns that look like the real thing, even though they only shoot plastic BBs. With the inability to tell the difference between legitimate sport training and training with a more nefarious goal, police agencies at all levels can only watch; their hands are tied.

ISIS stared as a splinter group from Al Queda, the terrorist group which President Obama promised us was on the run and all but destroyed. They have already shown their true heart in their treatment of Iraqis who opposed them.

While their treatment of their fellow Iraqis has been brutal to say the least, that’s not the biggest concern for us here in the United States. The Islamic State has already stated their intent to attack the United States.

They have taken over chemical weapon production sites and materials which were discovered from Saddam Hussein’s reign. In addition, they have a goodly supply of United States Army equipment which was left in Iraq for use by the Iraqi Army.

Informal spokesmen from the Islamic State have already started tweeting about how they will be in New York within a month. While that may seem like an exaggeration, we really don’t know how many of them might already be inside our borders.

With the flood of illegal immigrants that are assaulting our southern borders and Obama’s efforts to hamstring the Border Patrol, literally thousands of them could have already sneaked into our country, without our knowing it.

Since U.S. law still states that one is innocent until proven guilty, nothing can be done about the 2.5 million Muslims who live in our country. While most probably want nothing more than to live peaceably, it is highly likely that there are some who are merely waiting for the opportunity to join the jihad and attack us.

Obama has people with ties to the Muslim Brotherhood in his administration and CAIR (the Council on American-Islamic Relations) is known to have ties to several terrorist organizations.

Of course, our quazi-Muzlim President and his administration are more supportive of these terrorists, than they are of law-abiding American citizens.

Law enforcement agencies are no longer allowed to view Muslims or those from the Middle East as terrorists, even though most of the world’s terrorists are from there. Instead of calling them terrorists, they are now calling law abiding patriots terrorists. So we can expect no true help from our left-wing government.

The question is, when and where will they act? There’s really no question as to whether or not they will, as they’ve already stated that they are going to attack the United States. To radical Muslims, you and I seem to be nothing more that animals to be slaughtered, and since we don’t obey Islam, we have no right to live.

Regardless of anything else, I am fairly certain we can expect an increase in terrorist activity, both here in the U.S. and around the world. As terrorists always do, they will strike quickly and viciously, in places where they are least expected, with the goal of causing as many casualties as they can.

The battle lines have already been drawn. Even though we can’t see them, we must be ready. If you don’t already have a concealed carry license, now would be a good time to get one.

If you don’t have guns in your home, it’s time to go shopping. There is no way to predict where the attacks will start or where they will lead. But it seems rather clear that there is no time to lose, as we can be sure that the attacks are on their way.