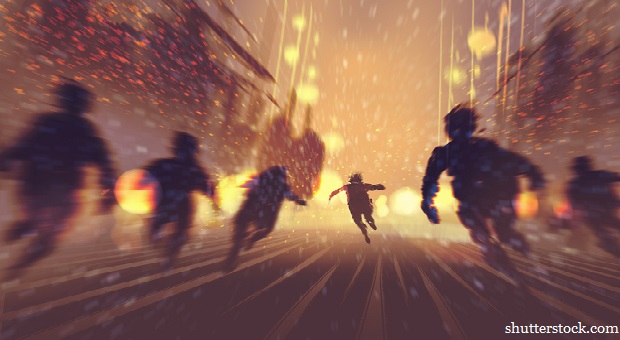 If you’re into watching Hollywood movies, you’ve probably noticed how the vast majority of people react in an SHTF scenario: pretty much like those famous fainting goats.

Okay, maybe I am exaggerating a bit, for the sake of argument, but generally speaking, fear is the mind-killer, and when it comes to unexpected and traumatic events, such as car accidents, people’s minds tend to shut off. One thing that preppers often overlook is mental survival, or how to stay cool, calm, and collected in a survival situation.

Feeding on one’s emotions during an SHTF situation will always lead to poor decision making, and in a survival scenario, this is very dangerous. When your life (and maybe others) may depend on your next decision, you have to stay as calm and focused as humanly possible.

To give you an interesting factoid, in a disaster scenario, approximately 80 percent of people basically freeze (the fainting-goat effect, a severe form of panic), while 10 percent “just” panic, which leaves a mere 10 percent actually capable to respond in a meaningful way and take action.

To understand the mechanisms of fear and panic during stressful situations, thus learning how to control your mental processes, you must know that, in times of stress, your body produces various hormones, like cortisol and adrenaline, which are well known to the general public due to their effect, often called “flight or fight response“.

When your body starts pumping out cortisol and adrenaline, your energy level and stamina get a significant boost; however, when the ‘drugs’ wear off, you’ll be confronted with both mental and physical fatigue.

It’s also worth noticing that cortisol, which is a stress hormone, causes the brain’s pre-frontal cortex and hippocampus to malfunction, to slow down basically, which means that fear really is the mind-killer, i.e. under very stressful conditions, you’re literally mentally impaired.

To make it real simple, in a “flight or fight” situation, your reptilian brain (amygdala) takes over your frontal cortex, which means you’ll be answering to a crisis situation with emotions instead of logic and reason.

This is why when people panic, they tend to react rather stupid (if at all), and it’s a “no brainer” (pun intended) that this kind of approach in an SHTF scenario is not the best, to put it mildly.

That’s why being capable of controlling your emotional state, thus being able to remain calm, cool, and collected in a survival situation is paramount, as it can make the difference between life and death.

The thing is, when it comes to survival, your ability to withstand stress in SHTF situations trumps physical fitness, i.e. it’s not always the strong who are the best at handling their emotions during emergencies. If you don’t have a positive mindset, your physical skills will most likely render useless in survival situations.

Keep in mind that survival is essentially a state of mind, as your brain is obviously the best survival tool you’ve ever had and your most valuable asset, hence in order to survive an SHTF event, you’ll have to understand the key ingredient of survival: the proper frame of mind.

With the right attitude, anything is possible, as the mind has the power to push the body to do extraordinary things. As records show, especially in emergency wilderness situations, people managed to stay alive on will alone, i.e. one’s will to live made survival possible against all odds on countless occasions.

Here are some tips and tricks to help keeping your mind in peak condition.

First, never play the blame game, as in never blame yourself. Even if it may be factually true (as in: it was your decision which led to an SHTF event), it’s a completely wrong and unproductive line of thinking, that would only render you ineffective and miserable. Try to concentrate on what to do next, how to get out of that hairy situation. It doesn’t matter anymore what would have happened had you acted differently or made a different decision, it’s all water under the bridge.

A very simple strategy that often has a huge impact, as in great results with regard to keeping one calm during a tough situation, is to reaffirm yourself. That can be done rather easily by creating a mantra, a certain phrase in your head, that can boost your spirits during a crisis.

Think along the lines of “keep going”, “never quit”, “I am one with the Force and the Force is with me” (this works for Star Wars fans), or whatever suits you better. The trick is to switch your mindset, to focus on positive things to think about during a crisis.

Realistic thinking and positive statements go a long way survival wise, as opposed to thoughts that make you depressed and fearful. You must challenge those thoughts with every fiber of your ego. However, you shouldn’t pretend to be someone else, i.e. a person devoid of emotions.

Address your emotions, acknowledge them as they come, don’t try to ignore them; just accept them, handle them, overcome them, and then move on.

Remember that saying about idle hands are the devil’s playground? The same goes for your mind in an SHTF scenario. To prevent your mind from turning onto itself, keep it busy, think of creative ways to ease your situation or to salvage plans, cook, tinker with your gear, fix your shelter, think critically about an ardent issue.

And I must emphasize it again, stay positive, focus on positive outcomes and positive things. Another thing to contemplate is that a healthy mind usually resides in a healthy body, which means that it’s much easier to stay positive and “think happy thoughts” if you’re rested, well-fed and in good physical condition, compared to the opposite.

Regardless of how bad the problem you’re facing is, you can stay calm by maintaining perspective. For example, if you’ve lost your food supply to wild animals, don’t despair, it could’ve been worse: you weren’t there, during the robbery I mean, so you weren’t injured/eaten yourself.

A very effective way to regain self-control in an SHTF situation, i.e. to stay calm, is to focus on breathing. There’s a breathing system called the 4-7-8 method. It goes something like this:

However, in this writer’s opinion, the best way to stay calm during an SHTF event is to always be prepared, both mentally and physically, for such an eventuality.

Plan ahead, train hard, eat the right things, and acquire as many survival skills as you can. Read and learn survival literature, like this website, watch videos, and get hands-on training, as there’s no real substitute for real-life experiences.

I hope the article helped. If you’re having questions or issues, don’t hesitate to comment in the dedicated section below.